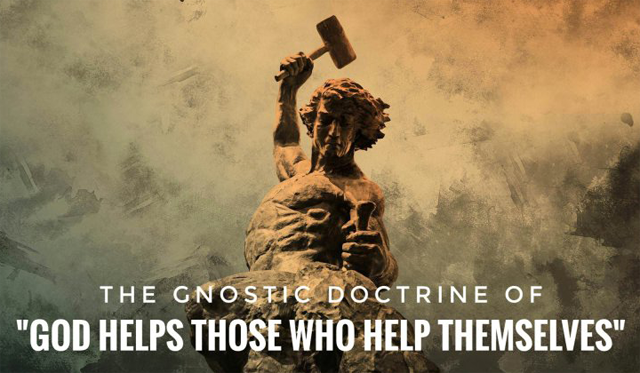 This is the 3rd article in which I am addressing Gnostic Doctrine that has infiltrated the “Christian Church”.

The phrase “God Helps those who Help Themselves” originated in ancient Greece and reflects the relationship of the pagans to their false gods. The original rendering was, “Divinity helps those who Dare.” (“audentes deus ipse iuuat”)(https://en.wikipedia.org/wiki/God_helps_those_who_help_themselves)

When asked if he had asked God’s forgiveness for his Sins, President Donald Trump responded by saying that he doesn’t know that he has. He just goes on and tries to make it “right”.

He goes on to talk about his former pastor Norman Vincent Peale who was a 33rd Degree Freemason. Trump’s doctrine on Sin reflects Peale’s Masonic view of self improvement rooted in Legalism & Gnosticism which leads people eventually to Hell(Proverbs 28:26, 14:12, 16:25, Hebrews 9:27, Revelation 20:14).

As Paul said in Romans 7, when he was in the flesh (v5) he was carnal (v14), sold under Sin. Even as a Pharisee, he could not be good. Paul was a Sinner who could not live a consistent life of Righteousness until he met Jesus Christ.

Jesus Christ didn’t come and die on the cross to help you think “positively”. He came to fix the broken part of you because you couldn’t do it yourself.

(Hebrews 7:25 KJV)
“Wherefore he is able also to save them to the uttermost that come unto God by him, seeing he ever liveth to make intercession for them.”

As Peter said in Acts 2:38,
You must “Repent …”
Repentance is to Turn from Darkness to Light.
This is what Jesus told Paul that He was sending him to do,
(Acts 26:18 KJV)
“To open their eyes, and to turn them from darkness to light, and from the power of Satan unto God, that they may receive forgiveness of sins, and inheritance among them which are sanctified by faith that is in me(Jesus).”

When you have Repented, Peter goes on in Acts 2:38 to say that you must,
“… Be Baptized … in the name of Jesus Christ for the REMISSION OF YOUR SINS …”
Remember that John the Baptist came preaching the Baptism of Repentance for the Remission of Sins (Mark 1:4, Luke 3:3) but even he knew that he yet had to be Baptized by Jesus (Matthew 3:14).
In Baptism to Jesus Christ, Jesus buries the Old Man of Sin.
(Romans 6:4-7 KJV)
“Therefore we are buried with him by baptism into death: that like as Christ was raised up from the dead by the glory of the Father, even so we also should walk in newness of life. For if we have been planted together in the likeness of his death, we shall be also in the likeness of his resurrection: Knowing this, that our old man is crucified with him, that the body of sin might be destroyed, that henceforth we should not serve sin. For he that is dead is freed from sin.”
(Colossians 2:11-15 KJV)
“In whom also ye are circumcised with the circumcision made without hands, in putting off the body of the sins of the flesh by the circumcision of Christ: Buried with him in baptism, wherein also ye are risen with him through the faith of the operation of God, who hath raised him from the dead. And you, being dead in your sins and the uncircumcision of your flesh, hath he quickened together with him, having forgiven you all trespasses; Blotting out the handwriting of ordinances that was against us, which was contrary to us, and took it out of the way, nailing it to his cross; And having spoiled principalities and powers, he made a shew of them openly, triumphing over them in it.”

Peter goes on in Acts 2:38 to tell us that if you Repent and are Baptized in the name of Jesus Christ for the Remission of your Sins, “… you shall receive the gift of the Holy Ghost.”
This is a Promise for those who Believe that Jesus came to Save his people from their Sins (Matthew 1:21).

This is the Salvation of the New Covenant prophesied by John the Baptist.
(Matthew 3:11-12 KJV)
“I indeed baptize you with water unto repentance: but he that cometh after me is mightier than I, whose shoes I am not worthy to bear: he shall baptize you with the Holy Ghost, and with fire: Whose fan is in his hand, and he will throughly purge his floor, and gather his wheat into the garner; but he will burn up the chaff with unquenchable fire.”

This is what we Receive. It is called being Born Again of Water and Spirit (John 3) whereby we cannot Sin (1 John 3:9) because we have His Holy Spirit dwelling in us and causing us to “… walk in” His “statutes” and again the Promise is that you, “shall keep” His “judgments, and do them” (Ezekiel 36:26-27).

This is the Gospel of Jesus Christ.

Jesus came to Save you FROM your Sins because you could not Save yourself FROM your Sins. He wants to and He will do it. IF YOU BELIEVE and REPENT and BE BAPTIZED IN THE NAME OF JESUS CHRIST FOR THE REMISSION OF YOUR SINS, HE WILL GIVE YOU THE HOLY SPIRIT.

(Luke 11:11-13 KJV)
“If a son shall ask bread of any of you that is a father, will he give him a stone? or if he ask a fish, will he for a fish give him a serpent? Or if he shall ask an egg, will he offer him a scorpion? If ye then, being evil, know how to give good gifts unto your children: how much more shall your heavenly Father give the Holy Spirit to them that ask him?”