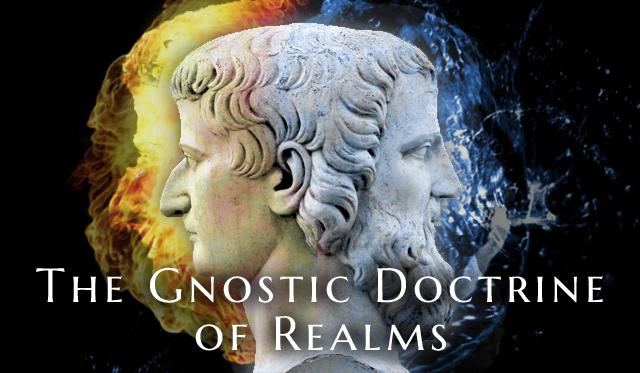 “A double minded man is unstable in all his ways.” -James 1:8

I have been studying the difference between the Greek philosophers and/or Gnostics view of the contrast between the physical and spiritual realms as opposed to what the Jews believed. The Greek philosophers and/or Gnostics believed that a man’s spirit was a good spark that had descended from the divine realm and become trapped in the lower material world where being confined to a carnal body his existence was not much better than that of a man living in a tomb. These Greek philosophers and/or Gnostics believed that simply living in a physical body caused one to sin and that true enlightenment was for the spirit to be freed from the carnal body. Thus their conclusion was that until death one could never be saved from sin. Sadly this philosophical belief is held more tightly by many professing Christians than they hold the teachings of Jesus.

The Bible tells us that Sin comes from nature (Romans 5:12-14) and from the heart (Matthew 15:18-20) not the physical body, because as James tells us the body without the inner man is dead (James 2:26). Paul did say in Romans 7:24 “O wretched man that I am! who shall deliver me from the body of this death?” but he is not reflecting the teachings of the Old Testament here, rather he is sharing his own former beliefs. Paul is actually speaking in the format that he often does in his writings, (2 Peter 3:15-16). Many people have misunderstood Paul’s words in Romans 7:14-24 and thought that he was writing as a Christian rather than understanding that Paul is speaking from his former perspective when he was a Pharisee under the law (see Romans 7:5).

Most people understand that when a person gets Born Again it is not the physical body that is getting changed but rather it is the heart and the spirit. As Paul said in Romans 2:28-29, “For he is not a Jew, which is one outwardly; neither is that circumcision, which is outward in the flesh: But he is a Jew, which is one inwardly; and circumcision is that of the heart, in the spirit, and not in the letter; whose praise is not of men, but of God.”

“The heart is deceitful above all things, and desperately wicked: who can know it? I the LORD search the heart, I try the reins, even to give every man according to his ways, and according to the fruit of his doings.”

Remember the prayer of David in Psalm 51:10-11, “Create in me a clean heart, O God; and renew a right spirit within me. Cast me not away from thy presence; and take not thy holy spirit from me.” David is asking God not to stop striving with him (Genesis 6:3, Genesis 32:24-28) and he as a prophet is asking for that which was yet to be promised by God in Ezekiel 36:25-27, “Then will I sprinkle clean water upon you, and ye shall be clean: from all your filthiness, and from all your idols, will I cleanse you. A new heart also will I give you, and a new spirit will I put within you: and I will take away the stony heart out of your flesh, and I will give you an heart of flesh. And I will put my spirit within you, and cause you to walk in my statutes, and ye shall keep my judgments, and do them. ”

So the Greek philosophers and/or Gnostics have impacted the thinking of most religious people of our day, but they were wrong. We are not pure divine beings that are trapped in sinful bodies that cause us to sin, nor is it the physical world that we live in that is causing us to sin. Sin comes from the human nature that we inherited from Adam’s sin. When man sins in his heart, his heart is also corrupted and when he commits sin in the world, he corrupts the world around him. Man cannot sin in the body and it not have come out of a choice in his innermost being. We do not live in 2 totally separate realms of Spirit and Physical as the Greek philosophers and/or Gnostics taught. We live in a Supernatural world where the things done in the body are done first in the heart (Matthew 5:21-30).

The serpent’s words in the garden, “You can sin and not surely die.” are still a lie.

Therefore all who have sinned must die and be Born Again of water and the Holy Spirit as Jesus said to Nicodemus in John 3.

The witness of Peter in Acts 2:38 is clear, “Repent, and be baptized every one of you in the name of Jesus Christ for the remission of sins, and ye shall receive the gift of the Holy Ghost.”

As Paul also said in Romans 6:4-7, “Therefore we are buried with him by baptism into death: that like as Christ was raised up from the dead by the glory of the Father, even so we also should walk in newness of life. For if we have been planted together in the likeness of his death, we shall be also in the likeness of his resurrection: Knowing this, that our old man is crucified with him, that the body of sin might be destroyed, that henceforth we should not serve sin. For he that is dead is freed from sin.”

And as John said in his first letter chapter 3 verses 4-10, “Whosoever committeth sin transgresseth also the law: for sin is the transgression of the law. And ye know that he was manifested to take away our sins; and in him is no sin. Whosoever abideth in him sinneth not: whosoever sinneth hath not seen him, neither known him. Little children, let no man deceive you: he that doeth righteousness is righteous, even as he is righteous. He that committeth sin is of the devil; for the devil sinneth from the beginning. For this purpose the Son of God was manifested, that he might destroy the works of the devil. Whosoever is born of God doth not commit sin; for his seed remaineth in him: and he cannot sin, because he is born of God. In this the children of God are manifest, and the children of the devil: whosoever doeth not righteousness is not of God, neither he that loveth not his brother.”

The Gnostic Doctrine of Free Will

The Gnostic Doctrine of Know Thyself

The Gnostic Doctrine of God Helps those who Help Themselves

The Gnostic Doctrine of the Mystery of Iniquity

The Gnostic Doctrine of Narcissism

The Gnostic Doctrine of Realms