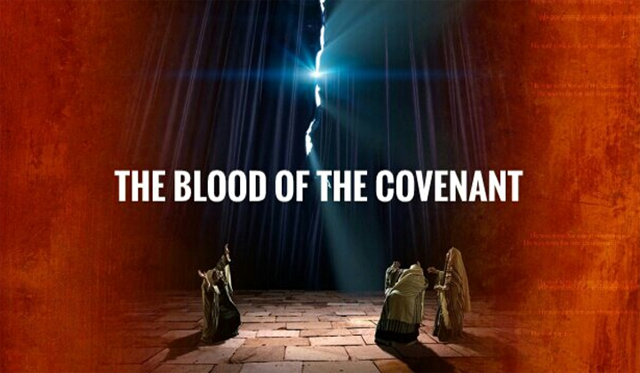 When I visited Costa Maya, Yucatan Mexico and saw the Mayan ruins and heard what the Mayans believed about their “gods” and their reasoning for the shedding of blood, Jon & David and I had an interesting conversation about the Gospel and over the last couple of weeks I have been thinking a lot about St. Patrick vs the druids and the immanent building of the Temple in Jerusalem.

Think about how God referred to Sin.

In Genesis God made it clear that = IF YOU SIN YOU WILL SURELY DIE. Satan as the Serpent in the Garden deceived Mankind into not believing the word of God and DEATH passed to all men and to the Creation itself.

Based upon the events that transpired in the Exodus story the Israelites gained an extremely healthy understanding of Sin. Their understanding was that Sin is like Anti-Matter to our Uni-verse (single-spoken-sentence = “Let there be…”).

The theory about Anti-Matter / Energy is that it is the opposite and cancellation of God’s equation of Matter-in-Motion. Not the absence of Matter-in-Motion but an opposite wave. So if the Creation of God is Ordered the opposite would not be Void but Chaos that goes towards an Undying Destruction as in an UnDeath, a Vampiric Black Hole that doesn’t just stop but rather sucks all nearby Life into it until the climax and destruction of all Life (Big Bang) before a complete Void state.

So the Mayans believed that the “gods” (the host of heaven = entities whose bodies were the sun, moon & stars) needed the release of the purest energy from the shedding of the blood of human royalty to fuel their movements and thus grow food to feed the common people. Their understanding was that without the shedding of the perfect bloodlines the “gods” would die and the Universe would fall apart. This is very close to the druid understanding.

Even so the Israelites knew that without the shedding of the blood of an unblemished Sacrifice there would be no Remission of Sins, Sin being a Cancer that is destroying God’s perfect Creation.

God established the Old Covenant as a Covering for the Iraelites, that through Faith in the allegory of the Sacrifice of the spotless Lamb for Sin they might be Saved from Sin when the allegory was fulfilled. All Sin thus being channeled through time to the cross.

When Jesus died on the cross He was not just a covering for Sin. He was THE Perfect Sacrifice. He was the heir of the perfect bloodline of God & the royal line of mankind having a genealogy straight back to God.

Thus He was the perfect and only Lamb of God and High Priest having no Sin in Himself. Thus He could offer Himself, shedding His own Blood for the Sins of those who come to God by Him.

When Jesus came He came as a Light into the Darkness just as He did in the beginning.

The world was and is corrupted by Sin and even the people who had been given the allegorical mystery of His coming could not see Him when He came because they had been blinded by the Devil, by the flesh / Sin nature that they inherited from Adam and by their own heart corrupted by habitual Sin.

They killed Him because they believed that He was trying to destroy the Old Covenant by which their Sin was Covered, but the time had come for them to be Saved from their Sins, which would bring an end to the Old Covenant Law as it would be Obsolete to anyone who has been Saved from Sin. Jesus came to Save His people from their Sins and that through opening a Way through Himself by the shedding of His Blood. No one could be Saved without Jesus’s Blood being shed and no one could be Saved without Dying.

Now what does this mean for you?

Before you can appreciate what Jesus has done for you, you must understand the seriousness of your Sins. You must be able to understand that you have identified with God by faith under the Old Covenant schoolmaster (the Law) and yet you have lived in Romans 7 = an HARLOT (according to the Flesh) against a perfect Husband. You knew what was right to do and yet you couldn’t do anything right. You have done what you knew to be wrong. It is healthy to be fearful in this situation because He has every right to reject you forever. You should Fear because He is righteous and just and without Sin and your Sin is against Him.

Jesus began His ministry by preaching Repentance. Repentant people came to Him and He was gracious and forgave them saying that those who are forgiven much show much love but those who love little show that they don’t believe that they have much that needs to be forgiven. He Resisted the proud.

After Jesus was crucified and rose again from the dead, Peter preached a powerful message. He rebuked the Jews for killing the Messiah / the Christ = Anointed King and Savior. And the Scripture tells us that they were cut to the heart. They were afraid because they realized the evil that they had done. They knew that they had killed the Son of God. What did that mean if Sin was like Anti-Matter?

It means that humanity (YOU) are guilty of extinguishing the source of Light. (This is also what Paul later realized after having killed Christians).

And they cried out, “WHAT MUST WE DO TO BE SAVED?”

Then Peter said unto them, “REPENT, AND BE BAPTIZED EVERY ONE OF YOU IN THE NAME OF JESUS CHRIST FOR THE REMISSION OF SINS, AND YOU SHALL RECEIVE THE GIFT OF THE HOLY SPIRIT. FOR THE PROMISE IS UNTO YOU, AND TO YOUR CHILDREN, AND TO ALL THAT ARE AFAR OFF, EVEN AS MANY AS THE LORD OUR GOD SHALL CALL.” And with many other words did he testify and exhort, saying, “SAVE YOURSELVES FROM THIS BACKSLIDING GENERATION.”

So let me make this clear. If you Sin, YOU WILL SURELY DIE AND WHEN YOU DO YOU WILL GO TO HELL. It doesn’t matter what you do, you can’t do good. The Law only shows you what Sin is. It can’t help you stop doing Sin.

Your answer is that you have to REPENT AND DIE. The Old Man of Sin who is the Flesh must be crucified and buried (Romans 6:4-6), but you can’t do that for yourself, Jesus has to do it. This is why Ananias encouraged Paul to call upon Jesus (Acts 22:16).

Go into the water and let Him drown your Old Man of Sin / Flesh and raise you up a Born Again Son of God / Spirit joined at last to God and filled with the Holy Spirit.

Then the promise of the New Covenant in Ezekiel 36:26-27 is that you are given a New Heart and a New Spirit and receive the Spirit of God who is betrothed to you in Righteousness and Faithfulness and He lives IN you For you and Through you and He causes you to walk in His Statutes and causes you to keep His commandments and do them.

It is Freedom from Sin and Peace with God. It is Rest.

God does all the work and receives all the glory.

Finally we see everything coming back to the CLIMAX. The Gnostic Gospel of sloppy Love, robotic Grace and repentance-less Forgiveness is taught in every church and mosque while the Jews know that without the shedding of blood there is no remission of Sins.

Anti-Matter (Sin) stands as a tidal wave over the earth ready to consume all Life and the Jews are desperately awaiting their Messiah who will make peace with the Muslim world and rebuild their temple so that the blood sacrifices can begin again. What the Jews don’t know is that having rejected their Savior from Sin, (Jesus Christ), they have doomed themselves to accepting the Anti-Christ, the man of Sin, who will bring in such Blasphemy of the Way of Salvation from Sin through Jesus that the tidal wave of Desolation will be released upon the Desolate. The trumpets are ready to sound and the pit is about to be opened (Isaiah 28:18, Daniel 9:27).

But whoever you are (Jew or Christian or gentile), call upon Jesus NOW and be Saved from your Sins. Come out of the World and be separate and be not a participant in the iniquity of the Synagogue of Satan (the Judaizers) and the Great Harlot (the Gnostic churches). Let Jesus crucify/drown your Old Man of Sin so that you won’t be overcome when the Tidal Wave of Deception and Destruction hits.

May the LORD give you Repentance and Faith to be Saved that you may Overcome all the Deception of the Enemy and stand at last faultless before the throne of God in the name of Jesus by the Power of the Holy Spirit of God. Amen.