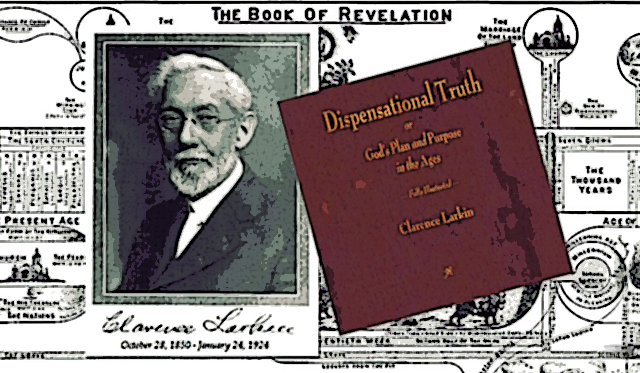 Jesus does not cause Tribulation as the Pre-Tribers would like us to believe. He rather allows it. As in the case of Job, Satan is allowed to do his evil work, while the Christian is preserved in the midst. For the true Christian this is not evil or unkind on God’s part.

Dispensationalists teach that God works differently in different “ages”, and to a certain extent that is true, in that there have been two covenants/testaments, but the Old Testament of the Law could not save. Only the New Covenant has the power to redeem the wickedness of mankind. The dispensationalist teaches however that there was a “Dispensation of law” in which men were saved by the keeping of the Law. Next there is the “Dispensation of Grace” in which Law is no longer necessary because Jesus blood covers all our sin, so that even though we sin every day we are covered by Grace. Finally the dispensationalist teaches that soon the Holy Spirit who gives Grace and restrains Satan will be removed from the earth and all those saved by Grace, yet remaining imperfect, will be Raptured to Heaven and those left behind will have to keep the Law in order to be saved, while Satan has free reign on the Earth.

The Gospel however teaches something far different. The Old Covenant could not save, it only covered sin by allegorical types and shadows. Those who died in faith not receiving the promise of salvation were saved by grace when Jesus descended into hell and preached deliverance to the captives through His shed blood. When Jesus was lifted up from the earth, the Holy Spirit descended on His followers and through them empowered by the spirit of God, He draws the whole world to Himself. Satan was also cast out into the earth to do his best evil work of Tribulation to stop God’s children. But God mocks all the powers of Earth and Hell by the power of His Spirit working to redeem the heart of lost men. Salvation is not simply a sinners prayer in which one prays and is forgiven, and then continues to sin and is slowly sanctified, rather salvation is a supernatural work of God where God Himself radically takes hold of a corrupt life and through the power of His Holy Spirit/Grace in that life, He begins to remove the desire for sin, and creates within that life a new desire for God’s righteousness and holiness. And He who began a good work will finish it. And the things of earth grow strangely dim in the light of His glory and Grace. Jesus said that He would be with us all the way even unto the end of the world. The Holy Spirit will never be removed as long as there are souls to be redeemed. Tribulation began when the Holy Spirit was given. God himself mocks Satan in and through His joyful martyrs who overcome him by the blood of the Lamb, and by the word of their testimony.

Thus the heresy of the Pre-Tribulation Rapture and Dispensationalism is exposed. It robs the power and the victory from the people of God. We were created to need God, as David proved before Goliath. God turns a weak filthy fallen wretch into a superhero who can withstand all that Satan can conger against him through the power of shed blood and the Spirit of God working in him. The true Christian does not fear, though the earth be removed and though the mountains be carried into the midst of the sea, because the LORD is his refuge and strength. Thus he not only wants to endure tribulation, rather he glories in it. This is the victory that over cometh the world, even our faith/trust in the goodness of God in the midst of Satan’s best efforts to steal our joy, make us doubt and curse God.

It says in Zechariah 13:9,
“And I will bring the third part through the fire, and will refine them as silver is refined, and will try them as gold is tried: they shall call on my name, and I will hear them: I will say, It is my people: and they shall say, The LORD is my God.”

The Dispensationalist would steal this intimate joy with God found only in Nebuchadnezzar’s furnace from the believer. He would seek to obscure the laughing face of God from within the flames of the god of this world. If Jesus stands in the flames, then that is where I want to be. If He walks on the waves, that is where I want to walk too. No, I cannot do this on my own. Alone I am dead meat before the cunning and wickedness of the arch Enemy, but God has not left us behind, He has come in to make us supernatural. We have been given everything that we need to live and to die for the glory of God. We have been given the power to withstand every attack of the enemy, to beet the enemy forces back into oblivion from whence they came.

Some will ask, “Does that mean that we can lose our salvation that we got when we prayed the ‘Sinners Prayer’ ?” The answer is, first of all, the ‘Sinners Prayer’ cannot save you. Salvation is not an inoculation that you gave yourself to keep yourself from dieing but still leaves you sick. Salvation is a supernatural catching of an already dead man by the All Powerful God, whereby He breeths Himself into him, and hides him in Himself, so that he lives by the Power of God and can never be lost. The question then arises, “Does this mean that he will be perfect from now on?” No, but it does mean that if he chooses to focus on himself and his surroundings thereby causing himself to stumble, the Holy Spirit of God will correct him and continue to change him. The Forgiven, Redeemed, Saved, Sanctified cannot live to themselves any longer. They have been given the Power/Grace/Mercy to resist all evil through the Perfection of Jesus and to live in the glory of the Righteousness of Jesus. The question is where is your Salvation? Is it in something you did for God, (i.e. accepting what He did), or is it in all that Jesus did for you, which caused you to surrender your will to Him, and to trust in Him and what He has done completely? Do you doubt Him because you do not believe in all that He has said, or do you trust and believe and surrender to Him because of what you know He has done?

If the Dispensationalist wishes to remain in his euphoria of dead lukewarmness and defeat, that is all well and good for him, but he has missed the heart of the Gospel and misrepresents the Holy Spirit of God. Like the Jewish Pharisees of old and the Catholic Priesthood. They are blind leaders of the blind, but we have come to the Light of the world.

The work of Redemption is Finished. We can have it now. We are Redeemed. We do not have to Fail anymore. The Doors of Heaven are open and we can live in Heaven now.

Thank you, oh my Father,
for giving us Your Son,
and leaving Your Spirit
till the work on earth is done.
– song There Is A Redeemer by Keith Green