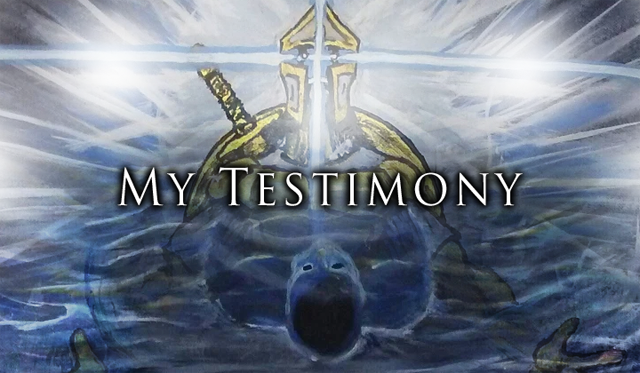 Before I was born God had told both of my parents separately to give me my first & middle name and told my mom that I would be, “A Mighty Man of Valor Waging War in the Spiritual Realm.”
At age seven I had received an acurate prophetic dream and the interpretation from God about an event that would take place five months from then and shared it with my mother. The prophecy came true exactly as the dream had fortold.
At fourteen I realized that I was unable to obey my parents perfectly like I wanted to and I told God that I wanted to surrender my will to Him and let Him control my life. An old family friend prayed over me at the time to receive the Holy Spirit and from that time on I knew that He was with me. I thought it strange that I didn’t start speaking in tongues at the time but I just assumed that if I was supposed to, God would make me do it.

Now it was Feb 2nd of 2016 and I was sitting alone in my travel trailer next to my computer having just spoken in tongues for a whole hour after hearing a preacher on a Youtube video say that if I have the Holy Spirit that I already have tongues, I just haven’t opened my mouth and spoken in them because I don’t believe enough to do it.
Now I knew that I had just spoken in a real language that I could not understand. Something had just changed in me forever and I knew that something outside me was involved and my relationship to it was off.
I suddenly knew that something was wrong and I felt fear and condemnation come over me. At that point I knew that either the source of the tongues was so holy that I could not stay in His presence or it was a devil and I was unprotected. Either way I was very afraid because I was realizing for the first time that there was still Sin in my life that was not hid from the Spirit Realm. Whatever the source of the tongues was, it knew that I was not innocent. It knew that although I looked like a good person to most people, I had still become a porn addict back in 2011.

Up to that point I had concluded that since I had surrendered my life to Jesus, that if I was sinning against my own will that it was up to Him to change me, and I had cried out to Him to save me after every time that I finally willingly submitted to the sin that I didn’t want to do. I had also been living in fear and condemnation for a long time trying to discipline myself out of the addiction by filling my time with early morning confession and prayer to God for myself and others and regular fasting of food and purging of my belongings, in case I owned anything that could be causing me to stumble into sin or was becoming an idol or a distraction in my life.
I was afraid, because I knew that everyone around me either never struggled and/or failed against lust or they were more of an addict than I was. Either way no one could help me break free from my sin, so I hadn’t talked about it with anyone.
As it got later I laid down on the dirty floor of the travel trailer that I was living in and began to sob uncontrollably. Thoughts about the pointlessness of my life and ministry work that I was doing swept over me. I told God that He was going to have to “Either Save me or Kill me and send me to Hell Now” but that I didn’t want to live my life in Sin (while only the Supernatural Realm knew) and go to Heaven. It wasn’t right. It wasn’t just and holy for me to go to Heaven.

Within the week I got invited to go to Minnesota with some friends from my church and there I heard the real Gospel for the first time.
On the drive out to Minnesota I met Mayah and at one point she drove the late shift and I kept her awake. As she drove she gave me her Testimony of how the Angel of the LORD came to her and preached the Gospel to her.

Honestly, it didn’t change me right then as I had had many supernatural things happen to me in my life but it filed in my mind.
That night a pastor was sharing the Gospel and he drew a picture on the board of a stick figure standing in the water and another stick figure lying under the water. Right then God showed me that I still had a dark figure inside me and all Satan had to do was cast a hook and catch it in my “Old Man of Sin” (Sin Nature / Human Nature / Flesh, etc ) and he could control me like a puppet.

The next morning God gently brought the Revelation that I had never actually Repented of my Sin or had the Faith that Jesus would Set me totally Free, but I realized that I could start fresh and He gave me the understanding that Baptism was how Jesus would set me Free and keep me free FOREVER, (Romans 6 & John 8).
One thing that I knew that I had to Believe was that Jesus would save me and give me the Holy Spirit, (Luke 11:11-13).

I got Baptized that evening, but nothing dramatic seemed to happen in the tub and so when I got out of the tub and began to dry off I was asking God why nothing changed and suddenly it was as if He pointed over my shoulder and back at the tub and He said to me, “Your Old Man of Sin is still in the tub.”
It was as if I saw the dark figure lying in the tub like someone in a coffin and I was overcome by joy and I heard the LORD say to me, “Now the Prince of this world comes and finds nothing in Me.” And I understood that when He said Me, He meant me.
We (God & I) were now One. I was no longer a slave to Sin. I was now a slave to Righteousness. I pulled the plug. That was February 7th 2016 and I have been Free from Sin, Porn, Condemnation and Guilt ever since.

If you would like to know more please check out my book:

The Gospel of Freedom From Sin and other Articles

This book contains SC Watchman’s personal testimony of what Jesus did for him in saving him from Sin along with a compilation of related Facebook Articles. What is wrong with the Gospel of the modern churches? Find out inside.

One thought on “My Testimony”