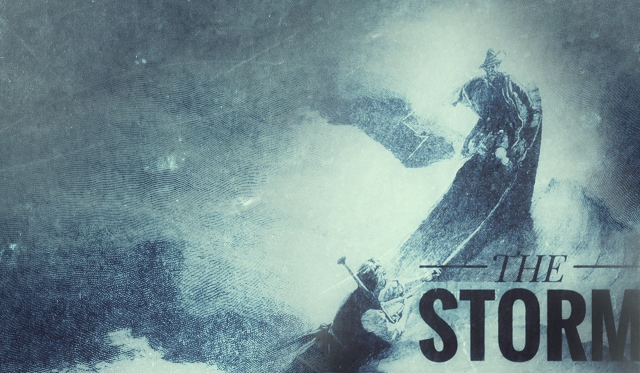 There were once two men who believed in God who went fishing in the sea.
They fished together and caught some fish but then the first man fell asleep.
The second fished for a little longer and caught more fish and then he also fell asleep.
While the two men slept a great storm arose on the sea and they could no longer see their destination.

The second fisherman was the first to awake and the sight that he saw was terrifying. The waves rose up higher than a house and smashed down again and again and the boat was tossed about violently nearly casting the two men out of the boat and into the raging waters.

The second fisherman called frantically to the first and told him that he must awake and call upon God and command the wind and the sea to be calm.

The first fisherman awoke and saw the wind and the waves but unlike the second fisherman he was not afraid of the storm. Looking around him he looked at the fear in his friends eyes and he was filled with compassion for him. He immediately called out to the storm and commanded it to be calm but neither man saw anything happening, what’s more the storm appeared to get worse. The first fisherman then prayed to God and asked that the storm would be calm but still neither man saw anything happening.

The second fisherman then began to frantically shout at the wind and the waves to be calm while he begged and pleaded with God for it to be so.

The first fisherman was still not afraid so he tried to encourage his dear friend that God is good and would protect them no matter what, and that even death could not separate them from God’s love and care.

The second fisherman then began to rebuke the first, telling him that he didn’t have enough faith to stop the horrible storm. The first was now confused. He couldn’t help the fact that he was not afraid and had commanded the storm to be calm and asked God that it would be so. He believed that his words were effective and that God had heard his prayer and he trusted God to save them. But how could he help his poor friend?
Was his friend correct? Should he believe the state of the storm and the fear of his friend or would that be unbelief?

What should the first fisherman do?