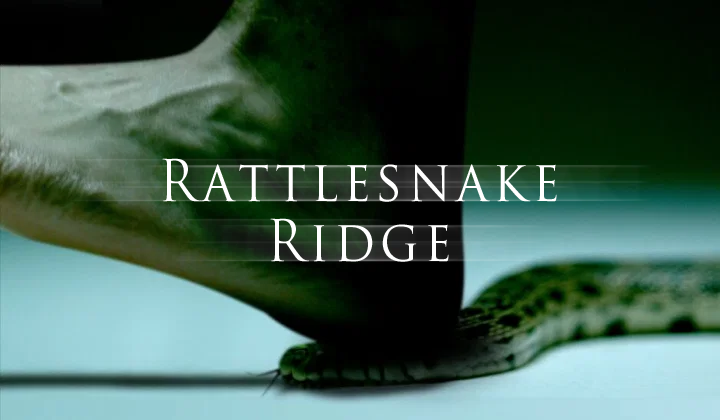 I had always been afraid of snakes.
I remember one time, when I was about ten years old, I reached down to pick up a black and orange stripped cord that was lying all coiled up like a whip in the field at the back of my folks property. I almost touched it before the head with the forked tongue suddenly popped up. It only ended up being a garter snake but at the time I was so terrified that I ran screaming bloody-murder all the way back to the house.
When I was thirteen my folks bought a property up by the Wyoming border and we discovered that the neighbors called our hill “Rattlesnake Ridge”, and true to it’s name we killed fifteen rattlesnakes a year for the next twenty years.
When I was eighteen my mom and sixteen year old sister got horses & my dad got goats and being the oldest boy in the family it became my job to haul the five gallon water buckets from the house about a quarter mile to the back of the property along the dirt road that ran parallel to the neighbors creek. Only problem was that all the local wildlife regularly came down from “Rattlesnake Ridge” to the creek at some point during the day to get water.
Over time I discovered that “prairie” rattlesnakes are non-agressive, meaning that they will strike at you if you step on them but they will not chase after you like a copperhead or launch themselves at you from eight feet away like a “diamondback” might. Even so, it was my custom to wear tall combat boots just in case I ever had an unfortunate encounter with one.
I often carried a 22 long rifle handgun with snake shot but I learned that the quickest and most efficient way to dispatch a rattlesnake is actually with a shovel. The most effective method of eradication is to raise a shovel over the snake and bring it down like a fly-swatter. It stuns them instantly and makes it impossible for them to strike. Then I could get close enough to guillotine them with the tip of the shovel.
Still whenever I heard the sound of a rattlesnake close to me I would jump out of my skin and shiver violently before I could recover enough to command it to stay there IN Jesus’s name and then take the necessary action.

Not long after my mom & sister got their horses my mom’s parents health began to deteriorate and my family went to take care of them while I was left alone to take care of the animals. Occasionally my elderly next door neighbor would call and ask my help with a project but for the most part I was alone and very lonely.
My brother’s dog was my only faithful companion and he ended up getting bit by a rattlesnake at one point and we took him to the vet to get an intravenous Vitamin C treatment which helped and made him act five years younger for a while.
Eventually the fear of rattlesnakes began to show up in my dreams, and I started dreaming that they were in the sheets at the foot of my bed. I remember jumping out of my bed on multiple occasions, (realizing afterwards that it was just a dream), but I always took it totally seriously as a demonic attack and commanded the evil spirits (that were either being exposed or had given me the dream to scare me) to leave IN Jesus’s name and after that I would crawl back into bed and go to sleep.
One night I woke up to a figure dressed in a long white Cardigan sitting calmly across from me resting his elbows on his knees. It was a full moon and very bright out and I had to go out and use the great outdoors. As I got up I remember that he politely leaned back to let me get by. When I came back I was fully awake and my visitor was gone. I remember that he had long black hair and was a little shorter than I and somehow I knew that he was always there with me and I had no fear of him at all. I believe that he is an Angel.

One night in 2013 I realized that I was going to need to haul extra water to the horses because I was going to have to leave early in the morning, and since I can usually see really good in the dark, I haven’t usually bothered to take a light with me. I took the two five-gallon water buckets and went around the corner of the mobile home to the spicket and began to fill them up.
The first red flag, that I didn’t heed, was that I had to put my finger into the bucket to feel the level of the water as I was filling it. It was darker out than I had thought it was going to be.
Next I put the buckets on the handlebars of my water hauling bike and started off down the hill toward the place where it forked and went along the creek. Just then I realized that I was going too quickly and couldn’t actually see well.
If there was a rattlesnake anywhere nearby I knew that I wouldn’t be able to see it in time and if it did rattle there was no way that I would be able to stop in time.
In my mind I said a quick prayer, “Thank you Jesus for protecting me from snakes.” And as I got to the fork of the trail my heal suddenly slammed down so hard that it hurt from the shock. I hauled four loads to the back and thought nothing more about snakes that night.

In the morning I had to run back and toss hay to the animals before I left and when I came to the fork … There right where my heal had slammed down the night before was the deep indentation of my heal print and in it was the crushed head of a young rattlesnake.

On reflection I couldn’t help but remember the following passage from Psalm 91:10-16 and see how God has fulfilled it in my life.

“There shall no evil befall thee, neither shall any plague come nigh thy dwelling. For he shall give his angels charge over thee, to keep thee in all thy ways. They shall bear thee up in their hands, lest thou dash thy foot against a stone. Thou shalt tread upon the lion and adder: the young lion and the dragon shalt thou trample under feet. Because he hath set his love upon me, therefore will I deliver him: I will set him on high, because he hath known my name. He shall call upon me, and I will answer him: I will be with him in trouble; I will deliver him, and honour him. With long life will I satisfy him, and shew him my salvation.”

God took good care of me over the years that I lived there alone as a hermit on “Rattlesnake Ridge” and He honored my faith. Then He brought some people into my life to bring me the Gospel and to help me get Free from Sin, but that is a story for another time….