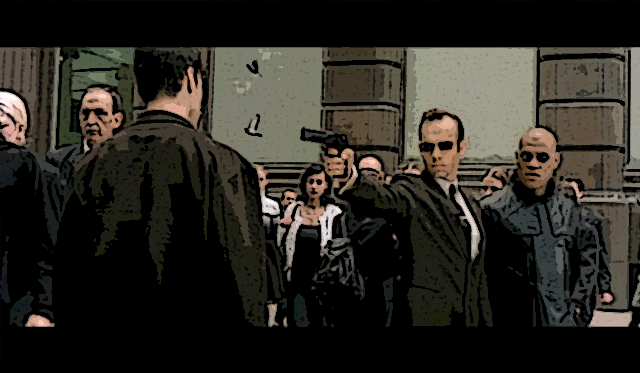 This following scene from the movie The Matrix makes no sense at all to the unbelievers who made the movie. They are bound in confusion, but the LORD showed me something in it a long time ago and so I’d like to share it with the reader.

“Morpheus: … If you are not one of us, you are one of them.
Neo: What are they?
Morpheus: Sentient programs. They can move in and out of any software still hard wired to their system. That means that anyone we haven’t unplugged is potentially an agent. Inside the Matrix, they are everyone and they are no one. We have survived by hiding from them, by running from them. But they are the gatekeepers. They are guarding all the doors. They are holding all the keys, which means that sooner or later, someone is going to have to fight them.
Neo: Someone?
Morpheus: I won’t lie to you, Neo. Every single man or woman who has stood their ground, everyone who has fought an agent has died. But where they have failed, you will succeed.
Neo: Why?
Morpheus: I’ve seen an agent punch through a concrete wall. Men have emptied entire clips at them and hit nothing but air. Yet their strength and their speed are still based in a world that is built on rules. Because of that, they will never be as strong or as fast as you can be.
Neo: What are you trying to tell me, that I can dodge bullets?
Morpheus: No Neo. I’m trying to tell you that when you’re ready, you won’t have to.”

We who know the Bible know that Satan has said from the very beginning, “Ye shall be as gods” (Genesis 3).

And yet a line from the Chronicles of Narnia comes to mind. (please keep in mind that I both grew up with Narnia and understand the problems in Lewis’s writings).

“It means that though the Witch knew the Deep Magic, there is a “magic” deeper still which she did not know. Her knowledge goes back only to the dawn of time. But if she could have looked a little further back, into the stillness and the darkness before Time dawned, she would have read there a different incantation. She would have known that when a willing victim who had committed no treachery was killed in a traitor’s stead, the Table would crack and Death itself would start working backwards.” -Aslan describing the Deeper Magic on which Narnia was built (Chapter 15 of “The Lion the Witch and the Wardrobe”).

When the LORD Jesus Christ, (God come in the flesh), laid down His life on the Cross, He cut through all the laws that Satan thought that he could use against the image of God.

Mankind chose to rebel against God in Genesis 3, he submitted to the will of the god of this fallen world.

And Revelation 13:8 tells us, “And all that dwell upon the earth shall worship him, whose names are not written in the book of life of the Lamb slain from the foundation of the world.”

Revelation 12:4 goes on to tell us that,
“And his tail drew the third part of the stars of heaven, and did cast them to the earth …”

This relates to Genesis 6 and the fall of the angels.

God destroyed the giant civilization created by the fallen angels with a great Flood in order that He might save the last of the sons of Adam that He might send a Savior through that liniage to redeem all those who put their faith in His FINISHED work on the Cross.

Revelation 1:18 tells us that Jesus said, “I am he that liveth, and was dead; and, behold, I am alive for evermore, Amen; and have the keys of hell and of death.”

Revelation 9 talks about how eventually the key will be given to the fallen star and he will be able to open the ancient gate, known as the “bottomless pit”.

When that day comes Revelation 9 and Joel 2 tell us about these giants that shall come from the pit.

Thus we must remember the ancient stories of the battles with the giants of old.

The Word of God tells us in Isaiah 59:19-21, “So shall they fear the name of the LORD from the west, and his glory from the rising of the sun. When the enemy shall come in like a flood, the Spirit of the LORD shall lift up a standard against him. And the Redeemer shall come to Zion, and unto them that turn from transgression in Jacob, saith the LORD. As for me, this is my covenant with them, saith the LORD; My spirit that is upon thee, and my words which I have put in thy mouth, shall not depart out of thy mouth, nor out of the mouth of thy seed, nor out of the mouth of thy seed’s seed, saith the LORD, from henceforth and for ever.”

Since the very beginning God has been taking simple men and making them mighty for His Glory, finally He came Himself and broke down every stronghold of spiritual power that the god of this world had been constructing against the Image of God in this earth. He did all this from the cross. Thus totally baffling the god of this world. He died on the cross, descended into hell itself and brought up all who had put their faith in Him long before. He rose from the grave and ascended into heaven and sent His Holy Spirit to fill His church.

(Matthew 16:18-19 KJV) … upon this rock [Thou art the Christ, the Son of the living God.] I will build my church; and the gates of hell shall not prevail against it. And I will give unto thee the keys of the kingdom of heaven: and whatsoever thou shalt bind on earth shall be bound in heaven: and whatsoever thou shalt loose on earth shall be loosed in heaven.”

At this point I recall
The Wrath of the Titans Trailer

I’m not saying that this was the intent of movie makers but just think about this:
(Romans 9:22-23 KJV) “What if God, willing to shew his wrath, and to make his power known, endured with much longsuffering the vessels of wrath fitted to destruction: And that he might make known the riches of his glory on the vessels of mercy, which he had afore prepared unto glory,”

To the fallen He said,
(Psalms 82:6-8 KJV) “I have said, Ye are gods; and all of you are children of the most High. But ye shall die like men, and fall like one of the princes. Arise, O God, judge the earth: for thou shalt inherit all nations.”

Of them which are saved John said,
(1 John 3:1-3 KJV) “Behold, what manner of love the Father hath bestowed upon us, that we should be called the sons of God: therefore the world knoweth us not, because it knew him not. Beloved, now are we the sons of God, and it doth not yet appear what we shall be: but we know that, when he shall appear, we shall be like him; for we shall see him as he is. And every man that hath this hope in him purifieth himself, even as he is pure.”

(John 11:25-26 KJV) “Jesus said unto her, I am the resurrection, and the life: he that believeth in me, though he were dead, yet shall he live: And whosoever liveth and believeth in me shall never die. Believest thou this?”

Let us now return to the Matrix quote. Many think that by moving and being more passive that they will survive longer. Wrong!

In Revelation 3:11 Jesus tells us, “Behold, I come quickly: hold that fast which thou hast, that no man take thy crown.”

We cannot die until our time has come, thus we are invincible untill the hour.

In Luke 10:18-20 Jesus told His followers, “… I beheld Satan as lightning fall from heaven. Behold, I give unto you power to tread on serpents and scorpions, and over all the power of the enemy: and nothing shall by any means hurt you. Notwithstanding in this rejoice not, that the spirits are subject unto you; but rather rejoice, because your names are written in heaven.”

This is a link to Revelation 9 and the creatures mentioned there.

(Daniel 11:32-33 KJV) “And such as do wickedly against the covenant shall he corrupt by flatteries: but the people that do know their God shall be strong, and do exploits. And they that understand among the people shall instruct many: yet they shall fall by the sword, and by flame, by captivity, and by spoil, many days.”

This cross references to Revelation 13:7 which tells us of the Beast, saying, “And it was given unto him to make war with the saints, and to overcome them: and power was given him over all kindreds, and tongues, and nations.”

Least we rejoice “that the spirits are subject unto” us let us remember where our victory comes from.
Revelation 12:10-12 tells us, “And I heard a loud voice saying in heaven, Now is come salvation, and strength, and the kingdom of our God, and the power of his Christ: for the accuser of our brethren is cast down, which accused them before our God day and night. And they overcame him by the blood of the Lamb, and by the word of their testimony; and they loved not their lives unto the death. Therefore rejoice, ye heavens, and ye that dwell in them. Woe to the inhabiters of the earth and of the sea! for the devil is come down unto you, having great wrath, because he knoweth that he hath but a short time.”

Are you an inhabier of earth or are you quickened together with Christ, and raised up together, and made to sit together in heavenly places IN Christ Jesus?  [Ephesians 2:4-6]