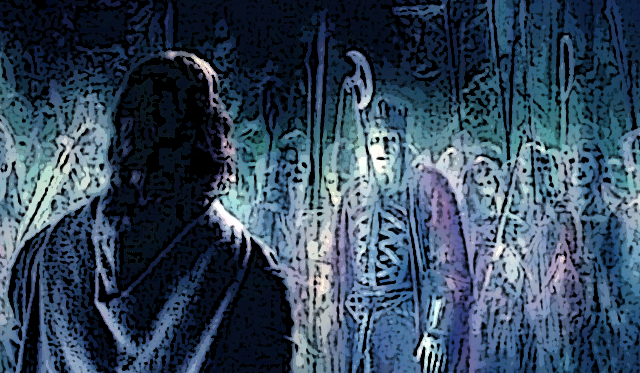 1 Peter 3:19-20 & Ephesians 4:8-10, talk about when Jesus descended into Hell.
“By which also he went and preached unto the spirits in prison; Which sometime were disobedient, when once the longsuffering of God waited in the days of Noah, while the ark was a preparing, wherein few, that is, eight souls were saved by water.”
“Wherefore he saith, When he ascended up on high, he led captivity captive, and gave gifts unto men. (Now that he ascended, what is it but that he also descended first into the lower parts of the earth? He that descended is the same also that ascended up far above all heavens, that he might fill all things.)
See also Zechariah 9:9-11,
“Rejoice greatly, O daughter of Zion; shout, O daughter of Jerusalem: behold, thy King cometh unto thee: he is just, and having salvation; lowly, and riding upon an ass, and upon a colt the foal of an ass. … As for thee also, by the blood of thy covenant I have sent forth thy prisoners out of the pit wherein is no water.” (Note Luke 16:24)
Jesus purpose in hell, (Acts 2:27), was both, “to preach deliverance to the captives”, (Luke 4:18), and to “judge” “the prince of this world”, (John 16:11), & “the princes of this world”, (1 Corinthians 2:6-8). One thing that I have imagined for a long time is how the gods of Greece and Rome are the same as the counterfeit  “archangels” (watchers) of the cabalaic Sephiroth “tree of life”, that was invented by the order of the rabbis in Babylon, when they combined the mysteries of Babylon with their own Talmudic view of the Old Testament. Their system became Jewish Mysticism, which after being combined with Hellenistic Gnosticism (Philo & Origen) became what is the foundation of the occult doctrine of the secret societies & new age movement of today. Note that Paul indicates the masquerading of these angels of light, (2 Corinthians 11:14-15). Remember how Jesus said that they were of their “father the devil”, (John 8:44), and how they said that He was of Beelzebub, (Matthew 12:22-37, < note also the reference to the tree in verse 33). The immediate thing that comes to mind here is Isaiah 5:20, “Woe unto them that call evil good, and good evil; that put darkness for light, and light for darkness; that put bitter for sweet, and sweet for bitter!”, and how the Grandfather of Freemasonry, Albert Pike (The Architect of the Matrix?) reversed the character of God and Satan,
“That which we must say to the crowd is – We worship a God, but it is the God that one adores without superstition. To you Sovereign Grand Inspectors General [of the 33rd degree], we say this, that you may repeat it to the Brethren of the 32nd, 31st, and 30th degrees – The Masonic religion should be, by all of us initiates of the high degrees, maintained in the purity of the Luciferian doctrine.
If Lucifer were not God, would Adonay, (The God of the Christians) whose deeds prove his cruelty, perfidy, and hatred of man, barbarism and repulsion for science, would Adonay and his priests, calumniate him? Yes, Lucifer is God and unfortunately Adonay is also God. For the eternal law is that there is no light without shade, no beauty without ugliness, no white without black, for the absolute can only exist as two Gods: darkness being necessary to the statue, and the brake to the locomotive.” -Albert Pike, from A.C. De La Rive, La Femme et l Enfant dans la Franc-Maçonnèrie Universelle (p.588).

I believe that Enoch, Jasher, and Josephus were historical texts written by men who tried simply to write historical accounts from their own perspective, while in the case of the Bible, we are told, “For the prophecy came not in old time by the will of man: but HOLY MEN of God spake as they were moved by the Holy Ghost.” (2 Peter 1:21)
Like the Rabbis of old, the modern textual critics use their own limited perspective and fallible thinking to reinterpret the scripture according to Hellenistic Gnostics like Origen (the Hexapla being the oldest copy of the LXX Septuagint [see The Septuagint A Critical Analysis by Floyd Nolen Jones, Th.D., Ph.D.]) who taught that the Book of Revelation should be taken completely as allegory.
Jesus is the standard of REALITY, (John 14:6). He is the written word of God made flesh, (John 1). God’s word, the Bible then, by the leading of the Holy Spirit, is our link to REALITY in a realm of deception created by the “god of this world”, (2 Corinthians 4:4).
The strong delusion, (2 Thessalonians 2:11-12), is not as much the going after myths, or false doctrines, as it is doubting the Word of God, and turning away from “the Truth”, and finally choosing myths. Doubt begins with the words.
Jesus says in Matthew 4:4, “Man shall not live by bread alone, but by EVERY WORD that proceedeth out of the mouth of God.”
Proverbs 30:5-6 says, “ EVERY WORD of God is pure: he is a shield unto them that put their trust in him. Add thou not unto his words, lest he reprove thee, and thou be found a liar.”
This is the shield of faith and the sword of the Spirit. If we doubt the Word of God, then we have neither and are devil (evil spirit) bait, yet if we are sealed IN Him, then nothing can snatch us out of His hand.

I often think about how textual critics are teaching:
That God had to take longer than 6 literal days to create everything.
That God did not perfectly preserve EVERY WORD for us today.
That God will rapture everyone out before Great Tribulation.

These things are foundational to understanding the Gospel and the nature of God.
God created Time(beginning), Space(heaven), Matter(earth), the Electromagnetic spectrum(Light) and the angels/gods to rule over it on the first day.
God did preserve His word and told us that He did, and He told us how He did what He did.
God will not rapture His children, rather His purpose in giving us His Holy Spirit is so that we could withstand the tribulation of the princes/gods of this world.
Anything else is to decrease the power of what Jesus/God accomplished for us on the cross and deify the wisdom of mankind.

But let us get back to the prophecies that Jesus fulfilled when He was in Hell.
Isaiah 26:19-21 says, “Thy dead men shall live, together with my dead body shall they arise. Awake and sing, ye that dwell in dust: for thy dew is as the dew of herbs, and the earth shall cast out the dead. Come, my people, enter thou into thy chambers, and shut thy doors about thee: hide thyself as it were for a little moment, until the indignation be overpast. For, behold, the LORD cometh out of his place to punish the inhabitants of the earth for their iniquity: the earth also shall disclose her blood, and shall no more cover her slain.”
Isaiah 42:13-16 says, “The LORD shall go forth as a mighty man, he shall stir up jealousy like a man of war: he shall cry, yea, roar; he shall prevail against his enemies. I have long time holden my peace; I have been still, and refrained myself: now will I cry like a travailing woman; I will destroy and devour at once. I will make waste mountains and hills, and dry up all their herbs; and I will make the rivers islands, and I will dry up the pools. And I will bring the blind by a way that they knew not; I will lead them in paths that they have not known: I will make darkness light before them, and crooked things straight. These things will I do unto them, and not forsake them.”
Hosea 14:14 says, “I will ransom them from the power of the grave; I will redeem them from death: O death, I will be thy plagues; O grave, I will be thy destruction: repentance shall be hid from mine eyes.”
Jonah 2:2 & 6 says, “… out of the belly of hell cried I, and thou heardest my voice. … I went down to the bottoms of the mountains; the earth with her bars was about me for ever: yet hast thou brought up my life from corruption, O LORD my God.”
Psalm 23:4 “Yea, though I walk through the valley of the shadow of death, I will fear no evil: for thou art with me; thy rod and thy staff they comfort me.”

Note how Norse cosmology works. Above is Asgard (Heaven). A Tree (Tree of Life? Cross?) acts as a bridge between Asgard (Heaven) and Midgard (Earth). Around Midgard (Earth) are the mountains of Jotunheim (the home of the giants). Hel (the place of the departed dead(Hell?)), is depicted below with Svartalfheim (home of the dark elves(Tartarus?)), and Nifleheim (world of the dead (Rephaim?)) and Nidavellir (the land of the Dwergar (devils=shedim? Greys?)). Interesting to say the least. Is Norse cosmology a fragment of a lost understanding of the inter-dimensional inner earth? I don’t know but the thought sounds intriguing in light of our subject.

What an epic scene this was as Jesus fulfills His promise to the thief on the cross, (Luke 23:43), and descends into the earth, (Ephesians 4:9), preaches to the dead believers in Paradise (where Lazarus was in Abraham’s bosom, Luke 16:19-31) and then brings them up out of Hell, spoiling the princes/gods of them. It partly reminds me of the concept of Gandalf in the Mines of Moriah (the temple mount where Jesus was crucified Genesis 22) and Aragorn in the Paths of the Dead, (not that I am saying that was J. R. R. Tolkien’s intent).