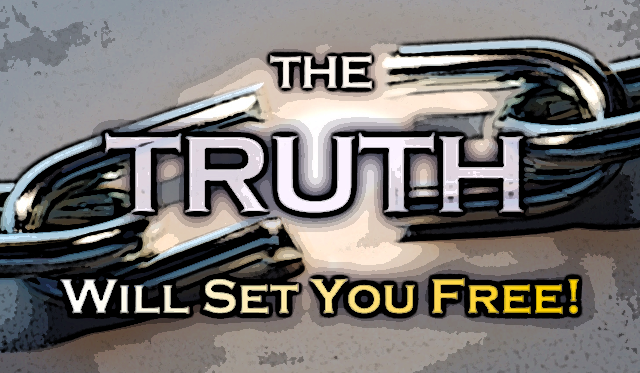 We often hear the message that “The Truth Is Out There” & “The Truth Will Set You Free”. People want to know what the truth is and they do not want to be slaves so they are ripe to be deceived by all kinds of false “truths”. Have they not first missed the important questions?

1 Corinthians 1:21-24
“For after that in the wisdom of God the world by wisdom knew not God, it pleased God by the foolishness of preaching to save them that believe. For the Jews require a sign, and the Greeks seek after wisdom: But we preach Christ crucified, unto the Jews a stumblingblock, and unto the Greeks foolishness; But unto them which are called, both Jews and Greeks, Christ the power of God, and the wisdom of God.”

That old Serpent called the devil and Satan came along and said that, Yes Jesus came to pay the penalty for Sin so that everyone who believes can go to Heaven when they die. Even the devils believe that Jesus is the Son of God but they are not saved. And thus he deceived humans through his subtlety because they did not perceive that those who Sin are the slaves of Sin, and that slaves will not remain in the house of God forever. The wages of Sin is Death, and when the end comes all Sinners will be cast into Hell Fire with the devil and his angels.

You must be Saved from Sin before you Die and only the Truth can Save you. The Truth is a person and His name is Jesus.

The Key is Matthew 1:21
“And she shall bring forth a son, and thou shalt call his name JESUS: for he shall save his people from their sins.”

Read the Gospel of John and his first letter and this will make much more sense.

Remember in Acts 2:37-41 at Pentecost when Peter preached to the Jews about how they had killed Jesus.
“Now when they heard this, they were pricked in their heart, and said unto Peter and to the rest of the apostles, Men and brethren, what shall we do? Then Peter said unto them, Repent, and be baptized every one of you in the name of Jesus Christ for the remission of sins, and ye shall receive the gift of the Holy Ghost. For the promise is unto you, and to your children, and to all that are afar off, even as many as the Lord our God shall call. And with many other words did he testify and exhort, saying, Save yourselves from this untoward generation. Then they that gladly received his word were baptized: and the same day there were added unto them about three thousand souls.”

Jesus came to Destroy the works of the devil(1 John 3:8-9). He does that in Baptism.

Romans 6:3-6
“Know ye not, that so many of us as were baptized into Jesus Christ were baptized into his death? Therefore we are buried with him by baptism into death: that like as Christ was raised up from the dead by the glory of the Father, even so we also should walk in newness of life. For if we have been planted together in the likeness of his death, we shall be also in the likeness of his resurrection: Knowing this, that our old man is crucified with him, that the body of sin might be destroyed, that henceforth we should not serve sin.”