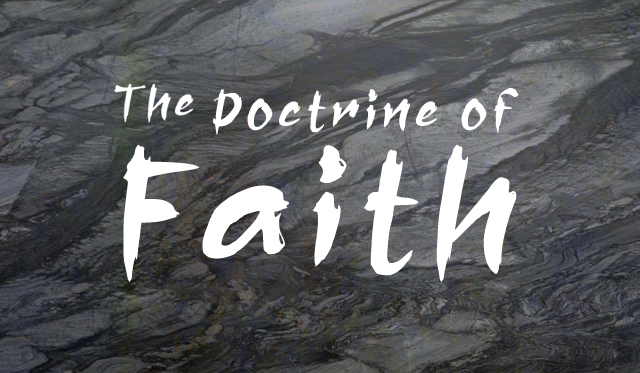 In the last part I talked about the fear of God and repentance. “Therefore leaving the principles of the doctrine of Christ, let us go on unto perfection; not laying again the foundation of repentance from dead works, … -Hebrews 6:1

We are now turning from the unfruitful/dead works and trusting in God to do the work in us, for us and through us. As the Hebrews 6:1 passage continues, we will now be studying faith toward God.

Hebrews 11 explains faith and points out those in scripture who had it. “Now faith is the substance of things hoped for, the evidence of things not seen. For by it the elders obtained a good report. Through faith we understand that the worlds were framed by the word of God, so that things which are seen were not made of things which do appear. By faith Abel offered unto God a more excellent sacrifice than Cain, by which he obtained witness that he was righteous, God testifying of his gifts: and by it he being dead yet speaketh. By faith Enoch was translated that he should not see death; and was not found, because God had translated him: for before his translation he had this testimony, that he pleased God. But without faith it is impossible to please him: for he that cometh to God must believe that he is, and that he is a rewarder of them that diligently seek him. By faith Noah, being warned of God of things not seen as yet, moved with fear, prepared an ark to the saving of his house; by the which he condemned the world, and became heir of the righteousness which is by faith. By faith Abraham, when he was called to go out into a place which he should after receive for an inheritance, obeyed; and he went out, not knowing whither he went. By faith he sojourned in the land of promise, as in a strange country, dwelling in tabernacles with Isaac and Jacob, the heirs with him of the same promise: For he looked for a city which hath foundations, whose builder and maker is God. Through faith also Sara herself received strength to conceive seed, and was delivered of a child when she was past age, because she judged him faithful who had promised. Therefore sprang there even of one, and him as good as dead, so many as the stars of the sky in multitude, and as the sand which is by the sea shore innumerable. These all died in faith, not having received the promises, but having seen them afar off, and were persuaded of them, and embraced them, and confessed that they were strangers and pilgrims on the earth. For they that say such things declare plainly that they seek a country. And truly, if they had been mindful of that country from whence they came out, they might have had opportunity to have returned. But now they desire a better country, that is, an heavenly: wherefore God is not ashamed to be called their God: for he hath prepared for them a city. By faith Abraham, when he was tried, offered up Isaac: and he that had received the promises offered up his only begotten son, Of whom it was said, That in Isaac shall thy seed be called: Accounting that God was able to raise him up, even from the dead; from whence also he received him in a figure.”

Abraham believed God and it was counted to him as righteousness (Romans 4:3, Galatians 3:6), James 2:23 even goes on to tell us “… and he was called the Friend of God.”

Hebrews 11 goes on to describe many who had faith toward God. Chapter 12 begins by telling us that we should lay aside anything that hinders and run this race of faith looking unto Jesus who is the author and finisher of our faith.

In John 8:31-36 Jesus refers to becoming a disciple indeed and becoming free indeed from sin through Him. Indeed means not figurative. It means Truth and Reality. It is not just an allegorical metaphor. It extends to all aspects of our lives most particularly our deeds/actions.

Being in Jesus is being in Truth/Reality. If He is not the center of your Reality then you might be starting to live in a Lie/Fantasy. Remember that Repentance is to turn from that Lie/Fantasy and to Him.

In John 14:6-7 Jesus makes it very clear that apart from Him there is no way to enter into truth or life or even to see or know God apart from Him.

Clearly to enter in we must first put or faith/trust in Jesus. As He said, “This is the work of God, that ye believe on him whom he hath sent.” (John 6:29)

In Mark 9:23-24 Jesus tells a man whose son is possessed, “If thou canst believe, all things are possible to him that believeth.” To which the father desperately pleaded, “Lord, I believe; help thou mine unbelief.” Clearly this man didn’t know if he had the ability to believe or not but he understood that Jesus could make him believe, and if he asked Jesus, Jesus might give him that faith.

Remember what the angel of the LORD said to Mary and to Joseph, Jesus’s earthly parents?

After His resurrection, Jesus’s disciples boldly testified of Him saying, “Neither is there salvation in any other: for there is none other name under heaven given among men, whereby we must be saved.” (Acts 4:12)

It is clear in scripture that faith in Jesus is a requirement for Salvation. Philip made it clear to the eunuch that in order to come to God one must fully believe that Jesus is the Son of God as the eunuch confessed in Acts 8:37 saying, “I believe that Jesus Christ is the Son of God.” Moreover we are told that all men are commanded to repent in Acts 17:30, “… God … commandeth all men every where to repent:”

In the gospel of John chapter 3 Jesus told Nicodemus that, “God sent not his Son into the world to condemn the world; but that the world through him might be saved. He that believeth on him is not condemned: but he that believeth not is condemned already, because he hath not believed in the name of the only begotten Son of God. And this is the condemnation, that light is come into the world, and men loved darkness rather than light, because their deeds were evil. For every one that doeth evil hateth the light, neither cometh to the light, lest his deeds should be reproved.” (John 3:17-20)

Do you believe in the LORD Jesus Christ to Save you FROM your Sins?

I invite you to join me in the next part as we continue in the doctrine of Christ.