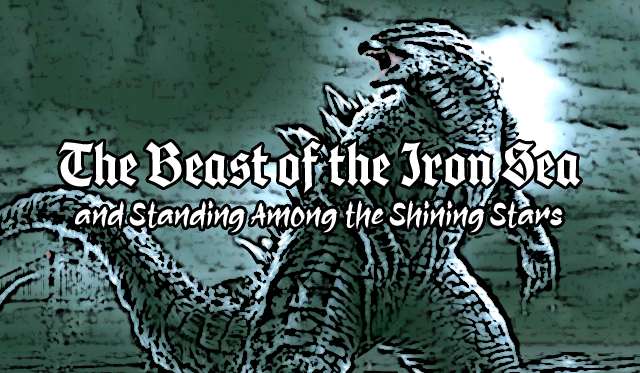 I am concerned, not because people want to take down the current system, sometimes referred to as the “kraken” or the “hydra” (which looks a lot like the 1st Beast from the Sea in Revelation 13) but because the New Age system that is being proposed to take it’s place looks like the 2nd Beast of Revelation 13.

There is a connection between the 10 toes in Daniel’s interpretation of Nebuchadnezzar’s dream (Daniel 2:41-43) and the 10 horns in the beast that has the Iron teeth in his own dream (Daniel 7:7) and the first beast of the Sea in John’s vision (Revelation 13). Note also that the 2nd Beast comes out of the Earth.

And note that the angel in Revelation 10 is at the 7th trump chronologically and has his feet on both the Sea and the Land.

I wonder if there is a connection here to the one that is Restraining the coming of the “man of Sin” in 2 Thessalonians 2:7, “For the mystery of iniquity doth already work: only he who now letteth will let, until he be taken out of the way. And then shall that Wicked be revealed, whom the Lord shall consume with the spirit of his mouth, and shall destroy with the brightness of his coming: …” (see the full context vs. 3-12)

Daniel also talks about Michael (the archangel see Jude 1:9) rising up in Daniel 12.

But let us look again at the Beast of the Land and “zero-in-on” the Mark of the Beast. It says in Revelation 13:16,

“And he CAUSETH all, both small and great, rich and poor, free and bond, to RECEIVE a mark in their right hand, or in their foreheads:”

That is clearly a system of Tyranny & Democracy combined because “to cause” is “to force” but to “receive” is voluntary.

Is it too much to see a connection between Admiralty Law or Maritime Law (the Law of the Sea), the Iron Law of the Roman Emperors vs the English Common Law (The Law of the Land)?

There is presently no Common Law saying that anyone in Government has the authority to force anyone to be vaccinated but rather the present governments are ruling by MANDATES (Maritime Law), and yet they say that you are responsible for your own choices and that it is completely voluntary.

Paul alluded to this in Romans 6 verse 16 in the context of coming out of Sin, “Know ye not, that to whom ye yield yourselves servants to obey, his servants ye are to whom ye obey; whether of sin unto death, or of obedience unto righteousness?”

Paul is referring to a principal of Roman(Iron/Sea) Law. If you submit to a Mandate, you are obliged to continue to do so.

Even so Paul also says in 1 Corinthians 7:21, “Art thou called being a servant? care not for it: but if thou mayest be made free, use it rather.”

I believe that we are currently seeing something of a shift happening from the 1st Beast to the 2nd Beast.

“For when they shall say, Peace and safety; then sudden destruction cometh upon them, as travail upon a woman with child; and they shall not escape. But ye, brethren, are not in darkness, that that day should overtake you as a thief. Ye are all the children of light, and the children of the day: we are not of the night, nor of darkness.”

From what Paul is saying, we know what is happening but regardless we must be about our Father’s business.

We are here to turn the hearts of the modern sons of liberty back to that which was known by the founding fathers of the faith (Malachi 4:6).

“And in the days of these kings shall the God of heaven set up a kingdom, which shall never be destroyed: and the kingdom shall not be left to other people, but it shall break in pieces and consume all these kingdoms, and it shall stand for ever.”

“And I saw another angel fly in the midst of heaven, having the everlasting gospel to preach unto them that dwell on the earth, and to every nation, and kindred, and tongue, and people, Saying with a loud voice, Fear God, and give glory to him; for the hour of his judgment is come: and worship him that made heaven, and earth, and the sea, and the fountains of waters.”

People have forgotten the Fear of God. They must be Awakened.

“And that, knowing the time, that now it is high time to awake out of sleep: for now is our salvation nearer than when we believed. The night is far spent, the day is at hand: let us therefore cast off the works of darkness, and let us put on the armour of light.”

“Awake to righteousness, and sin not; for some have not the knowledge of God: I speak this to your shame.”

“Wherefore he saith, Awake thou that sleepest, and arise from the dead, and Christ shall give thee light. See then that ye walk circumspectly, not as fools, but as wise, Redeeming the time, because the days are evil.”

Be encouraged. Ask God for the most effective way to Awaken people so that they don’t simply transfer their loyalty from the 1st to the 2nd Beast but to the kingdom of God. There is a great multitude of dry bones to Awaken (Ezekiel 37) and we are here for such a time as this, to preach the Good News of the Kingdom of Heaven, to heal the sick, cleanse the lepers, raise the dead, and cast out devils (Matthew 10:7-8).

“And at that time shall Michael stand up, the great prince which standeth for the children of thy people: and there shall be a time of trouble, such as never was since there was a nation even to that same time: and at that time thy people shall be delivered, every one that shall be found written in the book. And many of them that sleep in the dust of the earth shall awake, some to everlasting life, and some to shame and everlasting contempt. And they that be wise shall shine as the brightness of the firmament; and they that turn many to righteousness as the stars for ever and ever.”

Another passage from Daniel stands out to me as a Warning.

“And they that understand among the people shall instruct many: yet they shall fall by the sword, and by flame, by captivity, and by spoil, many days. Now when they shall fall, they shall be holpen with a little help: but many shall cleave to them with flatteries. And some of them of understanding shall fall, to try them, and to purge, and to make them white, even to the time of the end: because it is yet for a time appointed.”

First Priority should be to be sure that you have the Fear of God. That you have Repented of and/or are turned away from your Sins. That you have put your Faith/Trust in Jesus Christ to pay the price for your past Sins and to keep you Free From Sin by the power of His Holy Spirit living in you for you and through you and causing you to keep His commandments and judgments and do them.

Second Priority should be to Awaken people to their need to be on the right side. They need the Fear of God and to Trust in Jesus to save them From their Sins even as you do.

Finally be ware of Flattery. Focus on the mission that God has given you and praise Jesus Christ who sits on the throne in Heaven. Don’t be distracted by your accomplishments. If they are yours, then they are of little spiritual profit, but if they are the work of God done through you then you only share in His work.