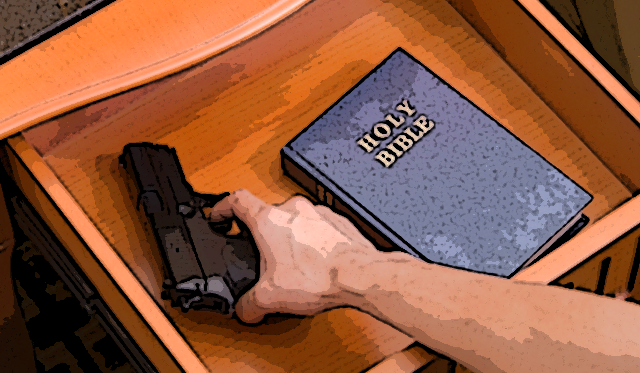 Let’s look at this from a contextual angle.

(Luke 22:35 KJV) And he said unto them, When I sent you without purse, and scrip, and shoes, lacked ye any thing? And they said, Nothing.
(Luke 22:36 KJV) Then said he unto them, But now, he that hath a purse, let him take it, and likewise hiis scrip: and he that hath no sword, let him sell his garment, and buy one.
(Luke 22:37 KJV) For I say unto you, that this that is written must yet be accomplished in me, And he was reckoned among the transgressors: for the things concerning me have an end.
(Luke 22:38 KJV) And they said, Lord, behold, here are two swords. And he said unto them, It is enough.

What can we glean from this?
Some make this into a divine command to all people everywhere, while others say that this was only so that the scripture would be fulfilled and that no follower of Jesus should be armed today.

Jesus would never tell people to do anything wrong and it was in fact illegal at the time, under Roman rule for anyone to carry a sword.

I think that it needs to be pointed out that Jesus is speaking to the 12 disciples who were men.

Women and children probably should be trained to use guns safely, but they are not the primary guardians of the family and are not the ones who were the recipients of this exhortation.

Among the 12 their were already 2 swords. Jesus said “It is enough.”

Because we were not there a question arises.
Was Jesus saying that 2 swords was enough for all 12, and that one was given to Peter, or does it mean that 2 swords were enough for 1 disciple who was trying to get points for going beyond the call of duty?

It could very well be that all of the disciples bought swords on the way out to the garden, but we really don’t know.

What we do know is that Jesus never told anyone to do anything wrong.

Peter reacted in his flesh trying to protect Jesus and ended up in opposition to the Gospel by his action.

(Luke 22:49 KJV) When they which were about him saw what would follow, they said unto him, Lord, shall we smite with the sword?

Jesus did not answer.

(John 18:10 KJV) Then Simon Peter having a sword drew it, and smote the high priest’s servant, and cut off his right ear. The servant’s name was Malchus.
(John 18:11 KJV) Then said Jesus unto Peter, Put up thy sword into the sheath: the cup which my Father hath given me, shall I not drink it?

(Matthew 26:52 KJV) Then said Jesus unto him, Put up again thy sword into his place: for all they that take the sword shall perish with the sword.
(Matthew 26:53 KJV) Thinkest thou that I cannot now pray to my Father, and he shall presently give me more than twelve legions of angels?
(Matthew 26:54 KJV) But how then shall the scriptures be fulfilled, that thus it must be?

What can we glean from this.

Of the 12 only Peter drew his sword and only Peter was wrong for doing so.

Whoever else was there who was armed was right both for being armed and for not reacting as Peter did.

Today being armed is a personal issue of conscience.

Realize that this is not an issue of Self Defense or a Constitutional Right or even a universal command from Jesus.

Rather it is an issue of love. It is saying to the enemy, “Take me instead of them.”

(Matthew 5:38 KJV) Ye have heard that it hath been said, An eye for an eye, and a tooth for a tooth:
(Matthew 5:39 KJV) But I say unto you, That ye resist not evil: but whosoever shall smite thee on thy right cheek, turn to him the other also.

(Romans 12:18 KJV) If it be possible, as much as lieth in you, live peaceably with all men.
(Romans 12:19 KJV) Dearly beloved, avenge not yourselves, but rather give place unto wrath: for it is written, Vengeance is mine; I will repay, saith the Lord.
(Romans 12:20 KJV) Therefore if thine enemy hunger, feed him; if he thirst, give him drink: for in so doing thou shalt heap coals of fire on his head.
(Romans 12:21 KJV) Be not overcome of evil, but overcome evil with good.

(John 15:12 KJV) This is my commandment, That ye love one another, as I have loved you.
(John 15:13 KJV) Greater love hath no man than this, that a man lay down his life for his friends.

But in the event that the enemy is bent on the tyranny and murder of the innocent and your blood is not sufficient to quell their insane rampage of bloodlust, then it is time to resist by whatever means necessary.

This was the conviction of Rev. Jonas Clarke & Deacon Parker when they made their stand with their congregation of 60-70 Christian men on the church green at Lexington when 700+ British troops came to take their arms and ammunition.

It was these men’s conviction that if they surrendered their arms then their families would not be safe, and it was their responsibility to care for the protection of their own families.

(1 Timothy 5:8 KJV) But if any provide not for his own, and specially for those of his own house, he hath denied the faith, and is worse than an infidel.

These men remembered the pastors who’s blood had been shed because they would not take the King’s license to preach the Gospel.

They would not enter into a contract whereby they could be tried and condemned lawfully for treason. Rather they would preach because that was what Jesus commanded them to do.

They also remembered the history of the Waldensians, and they believed that they like them had done everything in their power to resist apart from bloodshed. And that it was time for them to make a stand for what was right while they still could.
Remember that they said, “Do not fire unless fired upon but if they mean to bring this to a war, let it begin here. We recognize no sovereign but God and no king but King Jesus.”